The Pursuit of Perfection

"It's the little things that make the big things possible. Only close attention to the fine details of any operation makes the operation first class." -

When I started Onebadwheel (aka OBW) I came out swinging. I thought that to get noticed in the emerging blogosphere you needed to have a sailors mouth (sorry, no offense to any of you polished and tasteful sailors) and be controversial. I made some good friends with some of the other NASCAR bloggers (and I think a few cynics as well).

Something I really wanted to do back then was learn about databases. I had been playing fantasy NASCAR games since 2001 and my tool of choice was something nascar.com had called Driver vs. Driver. That tool is the inspiration for everything I have done!

DRIVER vs DRIVER and my FIRST DATABASE

Eventually, that tool either disappeared or I simply wanted more, I'm not sure which. So, I set out to learn databasing with the goal I proclaimed on Onebadwheel to build the Ultimate Fantasy NASCAR Database.

I spent hours and hours working on it. When the wife and kids were heading off to bed, I was starting a pot of coffee. Slowly, I hand-entered NASCAR race results into my database.

I created some queries on that little database to tell me: what a drivers average finish was, how he had finished at a particular track over time and about 10 other things I can't even remember. I was fascinated and hooked!

Onebadwheel grew more popular and I always strove to make it the best it could be. I had some help and encouragement along the way.

First and foremost, my buddy James Jones. A guy I didn't even know, out of the blue, wanted to write an amazing Car Number Countdown to Daytona for the site. For free no less! James continued to be a big help by writing and also telling me when I was stupid and when I was brilliant. He is an equal-opportunity offender like that.

Then I became friends with Charlie at OnPitRow . Jeff Gutowski, Eric McClung and Ryan Rantz all joined in and helped write great content simply because they are great guys and love NASCAR.

All the time it took to run Onebadwheel (I wasn't really too smart in how I built it) and the dreadfully long NASCAR seasons took its toll and I shut Onebadwheel down in April of 2009.

Good riddance. I was burnt out. 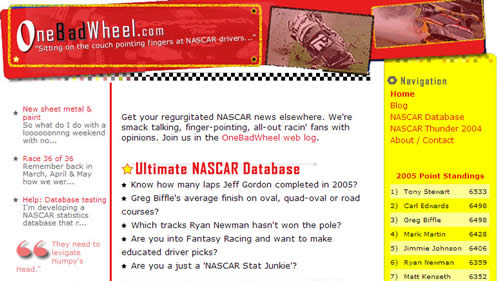 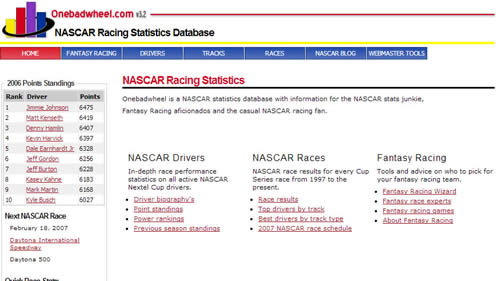 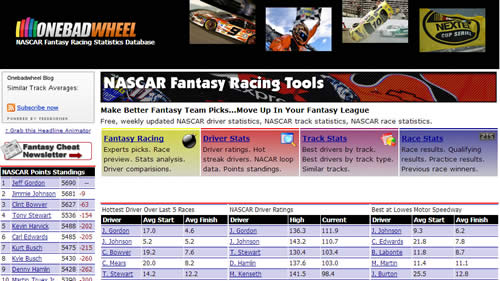 Charlie, from OnPitRow, and his posse came down to Texas for the Fall race that year. Talking to him in the stands I elaborated on a concept that James and I long discussed. Actually creating an awesome product to sell on the site. A Fantasy NASCAR Draft Kit. I think I was on Go Daddy that night after the race looking at domain names. I snagged this one up and started to draft out my plan on how to accomplish this draft kit idea.

I wrote and wrote until I completed driver and track profiles for the top-35 drivers. Charlie, Ryan and Eric all pitched in with a fantasy snippet for each driver as well. The site looked pretty darn good and was filled with tons of useful fantasy NASCAR information. Still, I wanted to offer something more that I felt fantasy NASCAR fans were not getting anywhere else.

NASCAR has an arm of the organization called the NASCAR Media Group. They do a great job providing NASCAR information to media outlets and in the last few years, NASCAR bloggers as well. NASCAR also has been collecting Loop Data since 2005. Loop Data is a bevy of statistics that tell all kinds of things about a drivers performance in a race. You can say what you like or don't like about how NASCAR runs things, but I give them high praise for their sharing of information such as Loop Data with you and I. It costs them a large amount of money to get. So, I used this Loop Data in my driver rankings on the 2010 version of the draft kit site. It went over well with the fantasy NASCAR fans that also say its importance over simple average finish position data.

I had zero intention of adding anything to the site once the 2010 NASCAR season had begun. I had not planned on updating statistics. Not offering any tools. To me, the site was a website version of a Fantasy NASCAR Draft Kit like you can buy off the magazine rack in January.

If I get 50 more emails about continuing to update the site through the year, then I will.

I had not anticipated the overwhelming positive response the site got. I began to count in my head the number of emails and told my wife, "If I get 50 more emails about continuing to update the site through the year, then I will."

For the next few years I developed tools like the STATISTICS WIZARD, EXPANDED STATISTICS and TRACK TYPE GROUPINGS. Cliff DeJong offered to share with me his NASCAR driver prediction algoritm that I dubbed ACCUPREDICT. And the Fantasy NASCAR Experts Picks was a big draw for paid and free subscribers.

THE DESIGNS CHANGE, BUT THE TOOLS REMAIN THE SAME

The statistical tools remained basically the same from 2015 to 2019. Fantasy NASCAR games were getting harder to find. Draftkings was saturating the market with promoting their NASCAR games and I had one weak page with some Draftkings relevant metrics.

This is the season that I phased out Fantasy Racing Cheat Sheet and introduced FRCS. The site now had a whole section of tools dedicated to DFS NASCAR games both for Draftkings and Fan Duel.

I'm a "never stop improving" kind of guy. I have many plans to carry out to shape and grow the strengths of what has taken many years to build.

There are many exciting experiences I've had within realm of NASCAR. Shoulder-to-shoulder at tracks and events, and shoulder-to-virtual-shoulder with the pioneers of fantasy NASCAR inforamtion and forums online. Diecast Dude, PJ Walsh, Trouble in turn 2.

I gained many friends online who are subscribers to my website. Who sometime endure long and rambling replies when a simple 'yes' would suffice. Others, waiting and waiting for a reply. With the re-coding base done and continial improvements I want to make to this site, added along with daily management and code of the Driver Group Game, I sometimes get into the 'flow' and your emails sink down the inbox which is always leaking emails into it.

The wildest thing are the handful of emails I get through a season from people mad at me because, "the race times should all be the same" or want me to tell Darrell Waltrip or Jeff Burton to "shut-up" during the broadcast as if I held this power. I never protrayed myself as NASCAR and acknowledge the great help they've been to the ones, like me, who came under the access umbrella to the great work of the NASCAR Media Group.

Thank you for your part in the site over the years! I'm here to provide you great fantasy NASCAR tools, accurate fantasy NASCAR advice and to foster and share my love of this great sport of NASCAR with you. 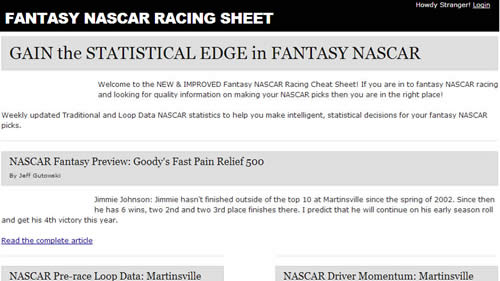 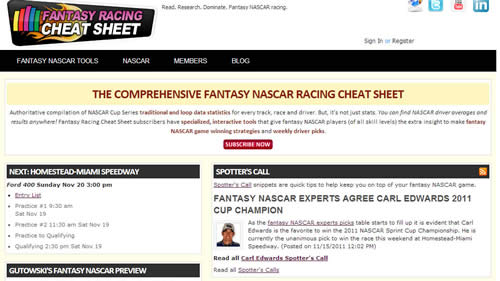 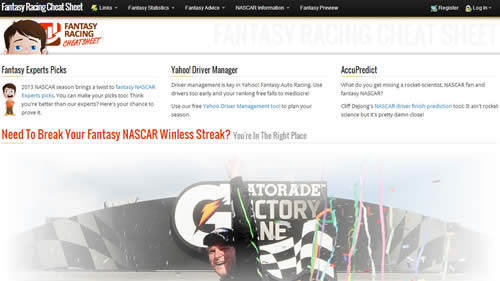 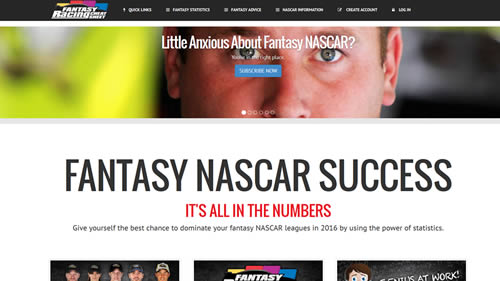 These individuals have contributed content, ideas and time to Onebadwheel and Fantasyracingcheatsheet and have been instrumental in improvements and progress. They are each much appreciated!